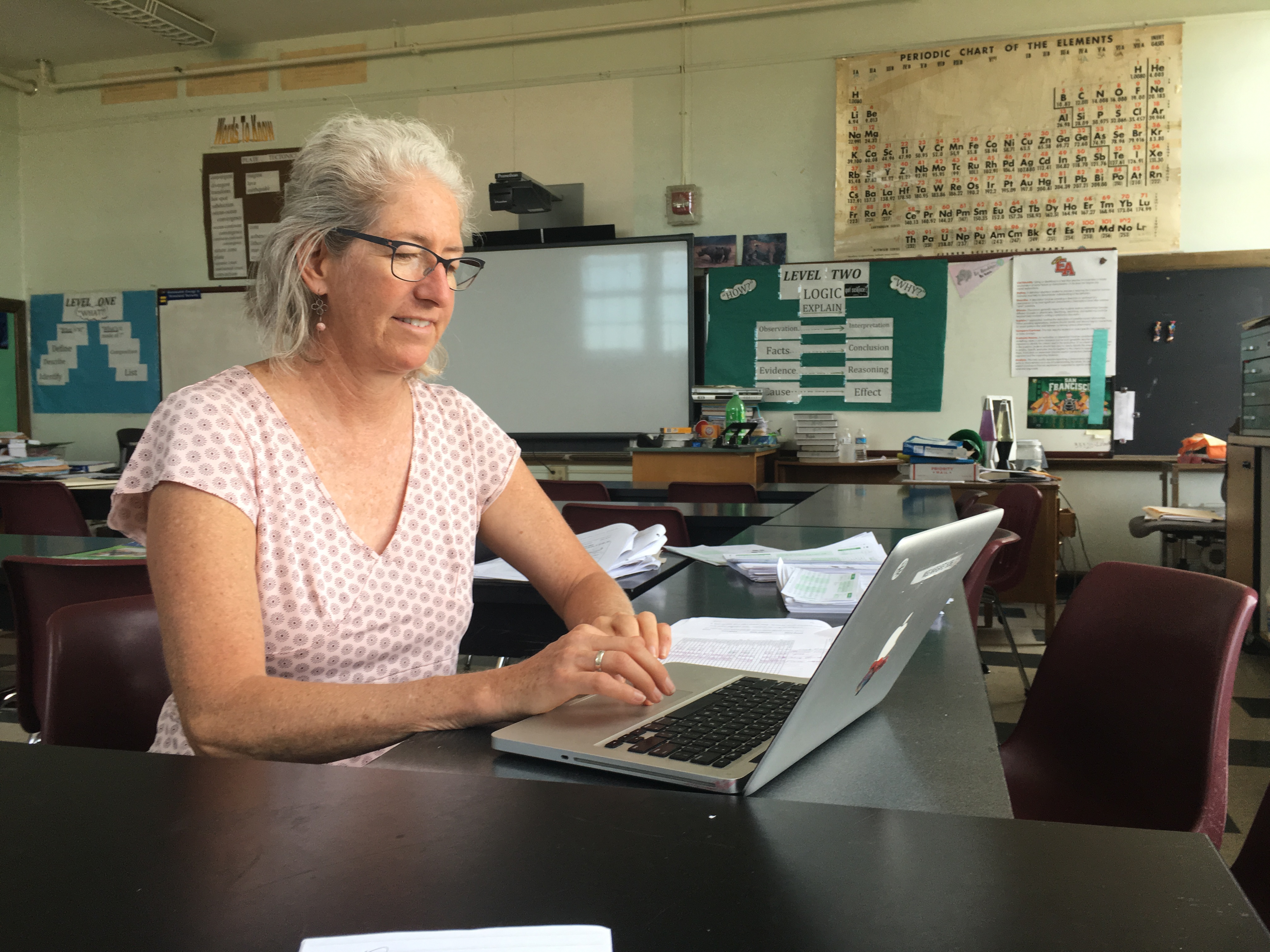 Ask Margaret Bobb about her experience as a Building Rep and you might not like what you hear. She probably won?t talk about the role?s perks. There are no extra paid days off ? and no additional compensation.

?I just have a really strong sense of social justice,? she said about her motivation for the role. ?As well as a strongly held belief in the power of collective bargaining. When teachers get together and bring a message to their administration, things change and shift.?

A 9th grade earth science teacher at East High School, Margaret spoke about her Building Rep duties from a fourth-story classroom on the west side of the grand, sprawling school. The sweeping vista of the city and mountains afforded from the windows provide an inspiration and a respite during long hours in the classroom.

?I love working from this room,? she said as she took in the view. ?I?ve been teaching for 25 years and have been a Building Rep for 22 of those years. Basically, the role is a conduit of communication to and from your building and the union.?

That can mean primarily keeping members and potential members informed of DCTA activity, including initiatives the union is pursuing, important events or meetings and issues that impact teacher?s work. Of course, it also means working to recruit new members by communicating DCTA?s efforts to improve working conditions and fight for fair compensation.

The work of the Building Rep gains renewed importance during contract years (like this year) when communication about bargaining is critical to keep a building?s teachers up to date on what?s occurring at the negotiation table. Every building has different communication needs and some may have a need for more than one Building Rep. To find out how you can participate, contact DCTA or your building?s representative.

?We try to motivate people and keep the message going,? Margaret said. ?We work to get people activated and attend the Rep Council meetings to be able to stay informed on what?s happening with the district and the union.?

Valerie Lovato echoed Margaret?s assessment of the role, but also noted some unexpected benefits. The Building Rep for Eagleton Elementary, Valerie said her own curiosity about the union originally attracted her to the role.

?I was just intrigued,? she said. ?But I really like how this allows me to get to know more people, both in my building and people outside of my building.?
A first grade ELA teacher who?s been serving as a Building Rep for three years, Valerie said she?s used the role to help her understand the teaching profession and the union?s role in more depth.

?I?m the first person in my family to be affiliated with a work-based union,? she said. ?So it was a new thing to me. I never really knew what union membership was all about. I wanted to learn more about what it meant to have a union.?

Both teachers said one aspect of the job that can be challenging, albeit necessary, is providing counsel and representation for teachers involved in grievances or other challenging conversations with administration. Although not ?officially? a grievance-related position, the Building Rep is sometimes called to serve as support and counsel.

?I?ve sat in on grievance meetings and I?ve been a sounding board for teachers,? Valerie said. ?A lot of times teachers will come to me asking ?can I just run this by you?? or ?what do you think of this?? and those types of questions. I may not always have the answers but I can find out for them. I know exactly where to get answers for harder questions if necessary.?

That?s not to say the Building Rep role is an adversarial position, Margaret said. Rather, the role provides an extra source of support and information for teachers in the building. And it can provide professional growth opportunities to learn and grow as a union member. According to Margaret and Valerie, the following are the top qualifications of a good Building Rep:

?One of the rewards of being a building rep is that the teachers are constantly telling me ?thanks for all you do.?? Margaret said. ?They really appreciate the extra effort I give and they appreciate that they can trust me. I feel very appreciated and validated by my building colleagues.?

If you think you might be a good fit for the Building Rep role, talk to your Building Rep about how you can get involved, or reach out to any DCTA staffer by emailing dcta@coloradoea.org.