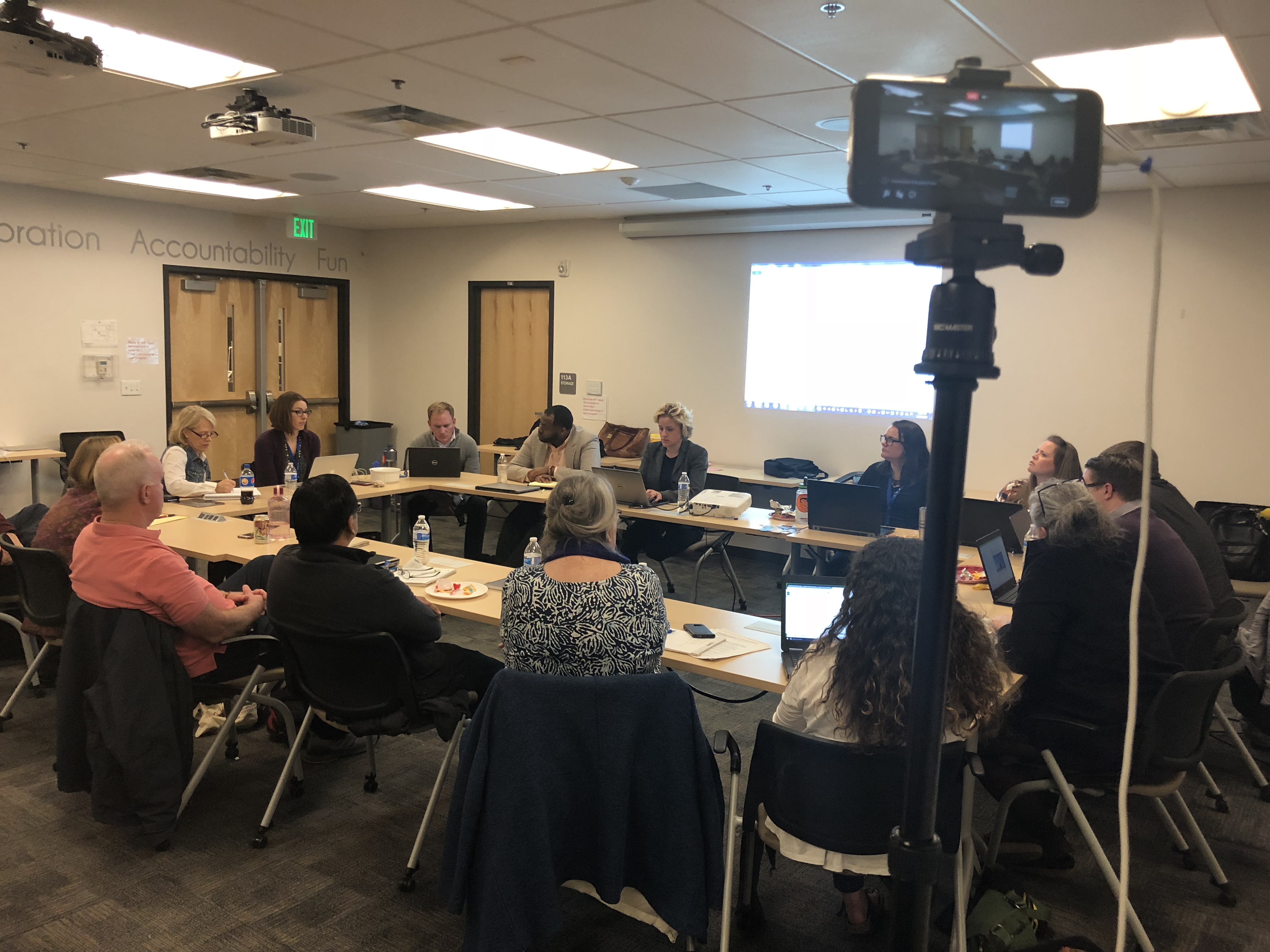 Photo above: Bargaining teams from DCTA and DPS negotiate for a new compensation agreement as the meeting is broadcast via Facebook

Negotiation teams for both DCTA and DPS returned to the bargaining table Tuesday night to renew efforts at creating a compensation system that strengthens schools, retains talented teachers, and recruits the best educators to DPS.

Following more than a month’s hiatus, negotiations re-focused on those issues identified in previous sessions as the most critical matters to be addressed in any new compensation agreement. On deck at the start of the evening was the question of how any new agreement must meet the requirements of “Distinguished School” status and properly compensate educators at schools that meet this designation.

Of primary concern to DCTA was redefining how “Distinguished Schools” are identified in order to ensure that this status – and the resulting bonus compensation that comes with it – is more equitably distributed among a more diverse and deserving group of schools.

“We know a good school when we walk in the door, even though we’re not always very good at describing it,” said Pam Shamburg, executive director of DCTA. “You know it. You feel it. But you really have a hard time pinning it down.”

What is apparent, the DCTA team said, is that what makes a “good school” isn’t solely dependent on student test scores. A host of factors like teacher and student retention rates, “whole child” programming, student discipline plans, wellness programs, and others should be considered when designating “Distinguished School” status, DCTA argued.

“One of the hopes is that these new designations would be contagious,” Shamburg added. “We hear from teachers that they don’t necessarily hear of things that are going well at schools. That is something that comes up pretty often.”

Consequently, promoting “Distinguished School” status districtwide, and identifying a broader cross-section of schools to receive the designation would help optimize the positive effects of the status across the district. Options discussed to accomplish this included spreading announcement of “Distinguished School” designees throughout the school year and incorporating more diverse categories that could provide aspirational motivation for schools contemplating similar improvements and programming. An ultimate goal, both teams agreed, is creating a system that avoids having the same schools being rewarded over and over again.

“What’s more,” said DCTA team member Rob Gould, “is this would be a great way to validate that we have great schools in every neighborhood.”

Up next was a much-needed conversation focused on how any new compensation agreement could better aid the needs of filling hard-to-staff positions across the district. Today, many SSP positions are contracted out due to the challenge of finding personnel with the qualifications and desire to work within a school district environment. Many of these roles, both teams noted, are difficult to fill because qualified applicants can find more financially rewarding work elsewhere in the private sector.

Contracting out SSP work weakens the power of those SSPs that are hired by the district, DCTA argued. In addition, the current practice requiring some SSPs to work in multiple schools throughout the week makes these individuals less effective in their roles – and less satisfied in their positions, which creates unproductive turnover rates. Some potential solution options discussed included creating tiered levels of incentives for particular roles based on education levels or other factors.

In order to fully discuss the issue, DCTA suggested additional data was needed on retention and recruitment rates for specific roles, as well as retention trends for both SSPs and teachers. DPS committed to obtaining this data for further discussion.

Conversations on these issues, as well as others previously identified in Compensation Bargaining sessions will continue at the next Bargaining Session, scheduled for Wednesday, Feb. 7 from 5:30 to 9:00 p.m. at 1617 S. Acoma St in Denver.