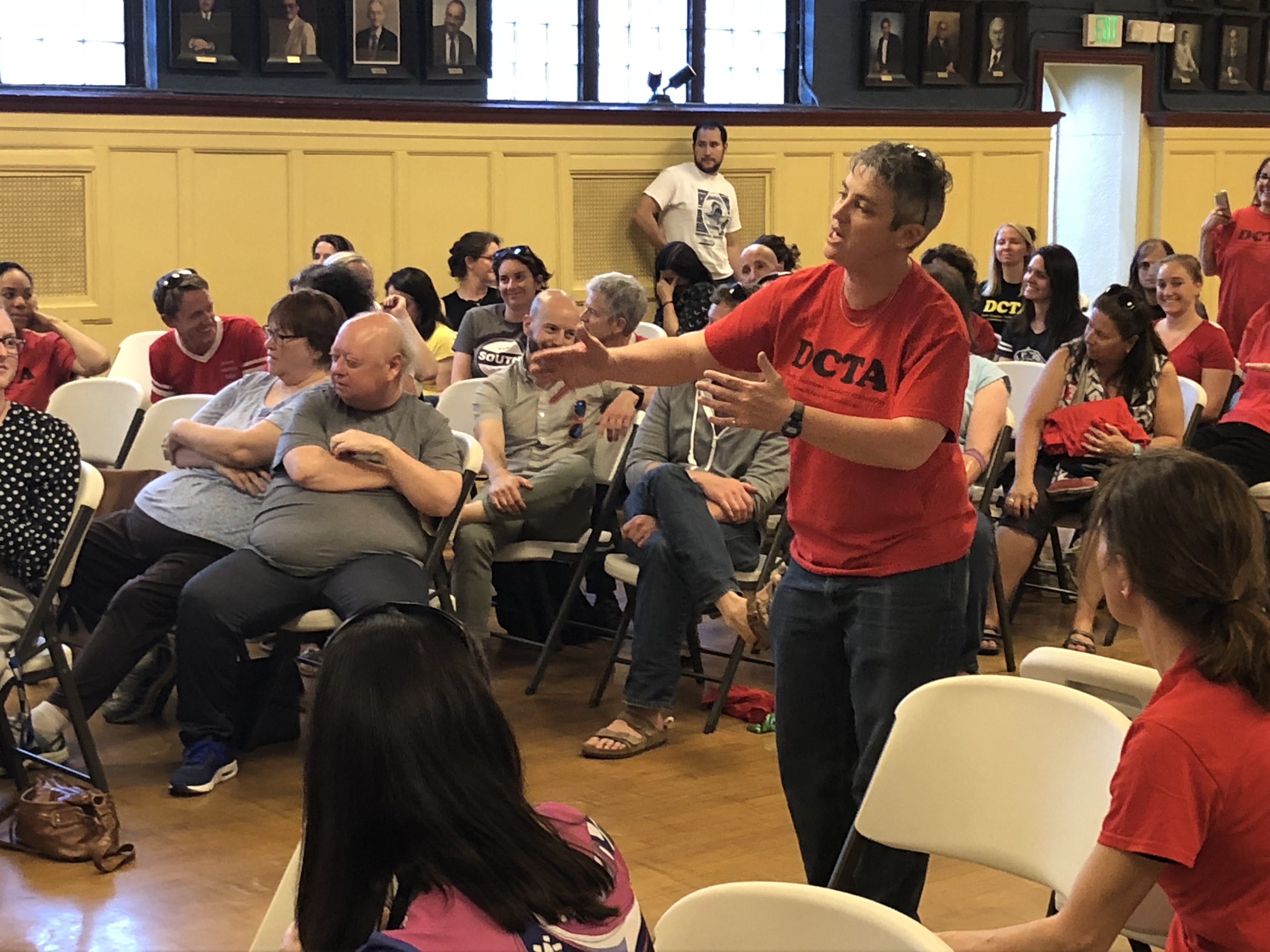 Above: A DPS teacher gestures while discussing the financial challenges of teaching in the district

Boasberg a no show at DCTA-DPS Bargaining Session as teachers seek clarity on district?s plan for $50 million of new DPS funding

At the last compensation bargaining session in mid March, DPS Superintendent Tom Boasberg looked directly at the teachers in attendance and promised to deliver increased compensation if educators worked to persuade legislators to increase funding.

As a result, DPS teachers marched in massive numbers on April 27 and the Colorado legislature approved $50 million in new DPS funding in early May. So educators throughout Denver were excited to hear Boasberg make good on his promise at last night?s Compensation Bargaining session, as well as eager to listen to details on how the new funding will be distributed.

Unfortunately, Boasberg never appeared at the session ? and district representatives that did attend offered no assurance the massive cash infusion into district coffers would be used for much-needed salary bumps to underpaid Denver teachers. In fact, DPS came to last night?s meeting with no new proposals, no new ideas and with no intent to bargain.

?At the table (in March), Tom said over and over again, ?If I had more money I?d give it to the teachers,?? said Pam Shamburg, executive director of the Denver Classroom Teachers Association. ?So now we?ve got more money. And guess what, legislators said go talk to the district. So we are here to talk to you about pay for our teachers. It is time to make that a priority.?

As Shamburg spoke, loud applause erupted from the capacity crowd in the Knights of Columbus hall. The cheers quickly turned to jeers as district officials explained that up to $15.9 of the new funding had already been accounted for in compensation commitments the district made to teachers during last year?s Master Contract negotiations.

According to DPS attorney Michelle Berge, the district anticipated these additional funds would become available, and therefore were able to make several teacher compensation concessions during negotiations last summer.

?So you?re telling us that the district knew in August that Colorado?s economy was going to be booming in spring?? asked Shamburg.

?We took a risk,? Berge said. ?I think there?s a lot of confusion about new money.?

?(The money) needs to be prioritized in the classroom,? Shamburg said, ?beginning with salaries for our teachers and SSPs.?

Throughout the night, teachers in attendance expressed anger, frustration and bewilderment at the inconsistencies between Boasberg?s promise of increased teacher pay and the DPS team?s insistence that new funding might be used elsewhere. What was completely absent from district representatives was clarity. DPS arrived with no new proposal in hand and vague explanations surrounding the new $50 million allocated to the district through the legislature?s passage of the School Finance Bill last month.

?Do I have to get a ?sugar daddy? in order to stay in this profession?? teacher Allison Mitchell asked the DPS team only half-jokingly. ?Am I not allowed to support myself??

A teacher at South High School who?s been with the district for nine years, Mitchell explained how teacher compensation is connected to the ongoing issue of disparate pay between men and women. In a profession dominated by female workers, teachers continue to fall behind financially to male counterparts in other professions, Mitchell explained.

?My pay has stagnated while my taxes and other costs have soared,? she said. ?To stay in this profession, to stay in this city, I shouldn?t need a sugar daddy. Teachers are not respected in this district.?

Mitchell was just one of several teachers who spoke up to explain to district officials how challenging it is to remain a teacher in Denver. Many teachers suggested they may need to leave the district or the profession in order to survive.

?I?m very concerned about my future,? said Matthew Placido. ?This is my first year teaching in DPS and I sank all my savings into my classroom. I now have no savings.?

Placido expressed praise and appreciation for his students, his staff and his school team, but he said he?s dismayed at the lack of support from the district. He?s planning to take a second or even third job next year in order to make ends meet ? and he?s concerned he won?t be able to give his students his full attention as a result.

?Being a teacher is not a ?gig,?? he explained. ?It?s a lifestyle. Next year I?m going to have to start dividing that up, and I?m concerned it?s not going to work out well. I?m not sure I can be the teacher I want to be if I?m constantly putting all that energy into other things.?

Anna Noble, a 15-year DPS teacher, told district representative that despite holding a Master?s degree in chemistry and education, her DPS salary is woefully inadequate to live and support her family in Denver.

Over and over, the mantra of ?there?s no reason to stay? was a consistent theme among teachers in the crowd.

?I?m a single mom,? Noble said. ?I went to meet with a mortgage broker. I have excellent credit so I met with a broker to see what I can afford. The answer is ?nothing.??

Despite the litany of concerns expressed by teachers, stone-faced district representatives provided little to no indication they had heard and listened to the needs of the teachers they claim to value.

?I know it?s hard to hear this, but teachers are angry and they are righteously angry,? Shamburg said. ?The district says they care about equity, but the teachers don?t feel it. The message that?s sent to them is ?you’re a commodity and we can replace you anytime we want.??

In a slight hint at collaboration, DPS did agree to meet in bargaining again next month to continue discussions. And in an attempt to ensure that Boasberg heard the frustrations of teachers, a contingent of educators marched at the close of the session from the Knights of Columbus hall on Grant St. to district administrative headquarters downtown.

Denver teachers will take their concerns to the DPS Board Meeting tonight to continue educating the district about the urgent need for increased teacher compensation. All teachers concerned about their future are urged to attend and make their voices heard. The meeting begins at 5 p.m. at the Emily Griffith Technical College on 1860 Lincoln St. in Denver.