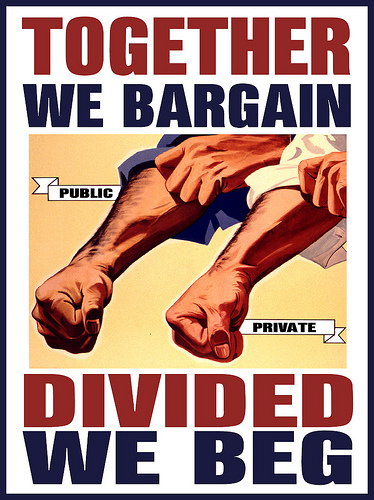 Living Wage and Other Proposals

District to DCTA: We can?t afford a living wage

First-year teacher Kevlyn Walsh gave a passionate accounting to DPS officials last night of the challenges she faces as a teacher working in one of the nation?s most expensive metro areas. In addition to working nearly 50 hours a week on teaching and lesson planning, Kevlyn said she has been forced to wait tables an additional 15 hours a week just to make ends meet.

The testimony brought a standing ovation and loud applause from the capacity crowd at Monday night?s Bargaining Session between DPS and DCTA as part of ongoing contract negotiations, where DCTA formally presented its compensation proposal of a $50,000 starting salary with proportional salary increases for all others.

Kevlyn described how she drives a 10-year-old car, must commute 20 minutes in order to live where she can afford the rent, must live with a roommate and can?t even dream of ever buying a home. As for her future in teaching, she is not optimistic.

?The amount of anxiety that I have to deal with on top of my schedule is making me crazy,? Kevlyn said.

The testimony did not paint an encouraging picture for a district that needs to recruit up to 1,000 new teachers a year due to turnover. The primary topic Monday was teacher compensation. DPS Chief Financial Officer Mark Ferrandino and his colleague Eric Johnson provided a district budget presentation during the session.

?I?m 28 years old. I have a Bachelor?s in Graphic Design and then I went back to Metro to get my teaching degree,? Kevlyn said. ?There?s a lot of learning that needs to occur during your first year. It?s really stressful to be learning all I need to know when I?m already working 65 hours a week. I?m trying to figure out why I am killing myself like this and how long I have to do it.

?I don?t know if I can do this for another couple of years,? she said. ?This is insane.?

The compelling story resonated with teachers throughout the room, with many shouting expressions of agreement. DCTA backed up Kevlyn?s story with statistics on the growing cost of living within the district:

? Denver currently ranked as the 7th most expensive city to purchase a home
? Monthly cost of living for a single adult with no children is $2,102
? Median price for a home in Denver in 2016 was more than $300,000
? According to a recent survey by Trulia, only 12 percent of Denver teachers can afford to buy a home here

District officials agreed with the need for higher salaries saying, ?We are with DCTA 100 percent.? However, they offered little evidence that they would push to identify ways to adopt the compensation proposal. CFO Mark Ferrandino?s discussion seemed to be an exercise to explain why the increased compensation proposal was not realistic. The DCTA Bargaining Team is committed to finding creative ways to increase teacher/SSP compensation.

But the crowd in attendance was less certain, citing District expenses in the central office, agreements to build projects in Stapleton and other district spending that they say is wasteful, as well as a failure to prioritize professional compensation for teachers and SSPs.

?Without our teachers we grind to a halt,? DCTA Executive Director Pam Shamburg said. ?If we don?t do something that says to our teachers, ?stick around, we value you, we?re going to get money to you,? we will have a real, real problem.?

The room roared with applause.