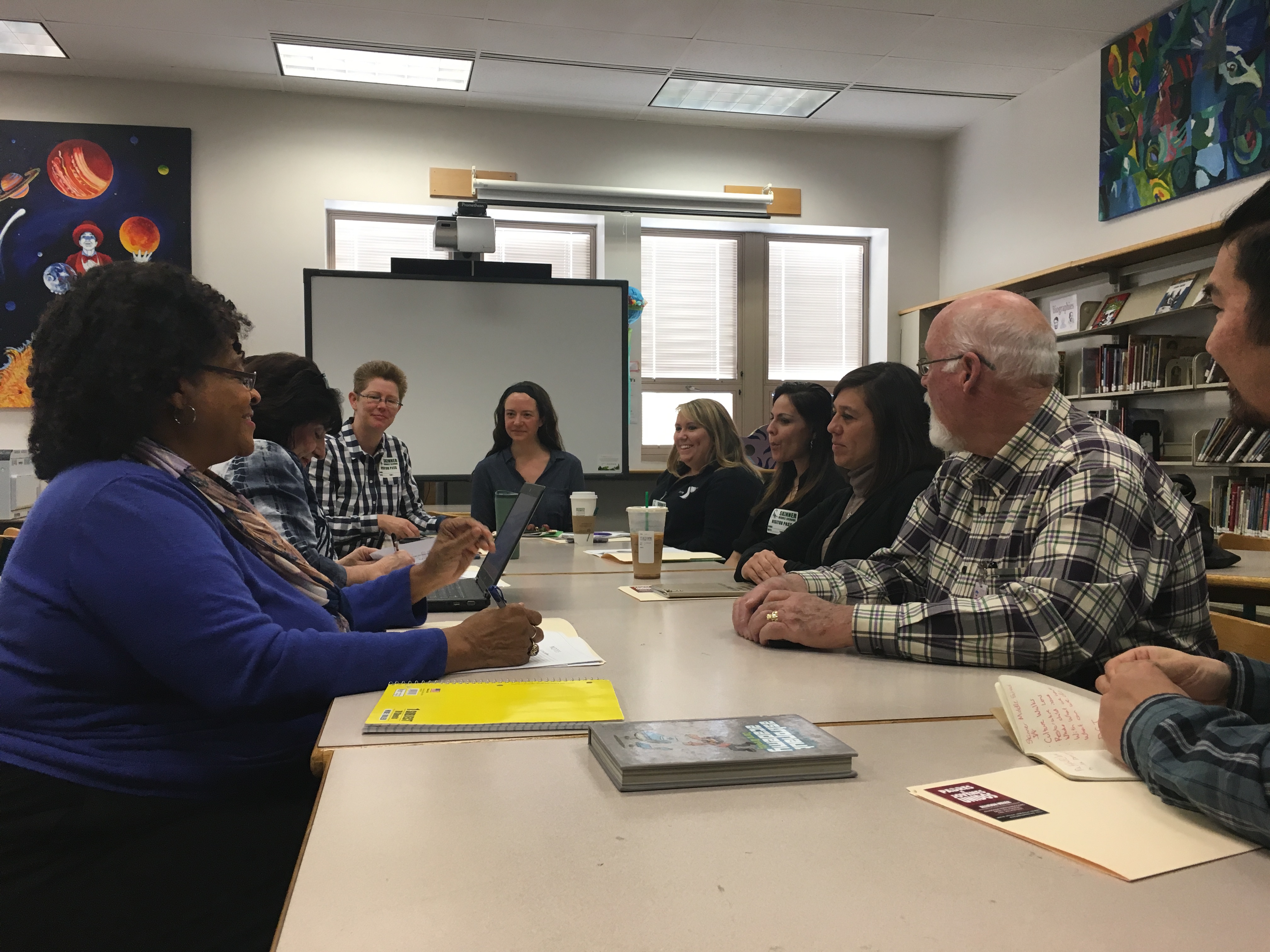 Chris Martin is a restorative practices champion today ? but his transformation from skeptic to true believer didn?t come without some convincing. A sixth grade science teacher at Skinner Middle School, Martin said he wasn?t raised with restorative practices in use at home or in school ? and he wasn?t certain that they worked or were worth the time.

?Initially I was not on board,? he said. ?I had worked in previous buildings that took a more traditional approach to discipline. During my first years as a teacher, I was learning the curriculum, working in a new district and I really didn?t have much of a clue how restorative practices worked.?

?I was skeptical that it would work, having never experienced it,? said Martin, who is a DCTA member and also serves as a senior team lead at Skinner. ?It felt too ?touchy feely? and I wasn?t that type of person.?

Today, however, Martin is a confirmed convert. And he said the resources available through the Restorative Practices Partnership Project have helped educate him on restorative work. A joint initiative of DCTA, NEA, DPS, Padres & Jovenes Unidos and other partners, the program works to implement restorative practices in three model schools while also providing training to interested schools.

?I?m grateful that we have leaders who are trained in it and who support and use the practices both with the staff and the students,? he said. ?I have really bought into it by seeing it, living it, experiencing it and using it. I think the reason our building is so successful is we have strong facilitators and we have a lot of training and support.?

DCTA is firmly in support of the initiative and is committed to the partnership, said DCTA President Henry Roman. Roman met recently with district leadership to discuss the imperative of ongoing funding, both for the current model sites and to expand restorative practices across the district.

?I think continued funding is really important,? he said. ?We believe that restorative justice does make a difference if it?s properly funded and properly implemented.?

Currently, the partnership is highlighting the implementation of restorative practices at three schools: North High School, Skinner Middle School and Hallett Fundamental Academy. Since Roman?s conversations, the district has agreed to continue funding the work for the coming three years to match the grant the Partnership received through NEA.

As a former full-time teacher, Allison Meier fully understands the challenges faced by educators ? and students ? in the day-to-day life of a classroom. She?s experienced firsthand the difficulties of managing a class and has witnessed the limitations of traditional discipline practices.

?There is so much research out there that shows that pushing kids out isn?t effective,? Meier said of the common suspension disciplinary tactic. ?It doesn?t change student behavior.?

Meier believes this so strongly, a year ago she stepped away from teaching full time to join Padres & Jovenes Unidos as the Restorative Practices Partnership Project Manager. In its current form, the partnership has been in place about 18 months

?We look at this as trying to instill restorative approaches as the alternative to harsh, exclusionary discipline practices,? Meier said. ?Things like suspensions, expulsions and referrals to law enforcement are actually harming schools in a lot of ways.?

For example, Meier said that suspending a student for even one day could make that student less likely to graduate, harming a school?s success record and potentially setting back the student for life. Restorative justice practices work to combat the ?school-to-prison pipeline,? and ?criminalizing? our youth, cited by both the U.S. Department of Education and Department of Justice as key goals, Meier said.

?All three of our participating schools have seen success using restorative practices,? Meier said. ?We?ve seen decreases in suspensions and expulsions and an increase in attendance.?

Educators recognize the value restorative practices bring to nurturing and strengthening relationships with (and between) students, said DCTA member Jennifer Engbretson, a teacher and instructional coach at North High School.

?The restorative approach is something I have really come to appreciate in my time here,? said Engbretson, who has been at North for five years. ?It?s just become a part of the culture in our building. When an incident occurs, we?re not quick to lay down a punishment. We?re going to look at what happened, see how it happened and how it can be resolved. I see that students are willing to have these restorative conversations with each other and with teachers.?

Restorative work aims to help students understand more fully the consequences of actions by engaging all impacted parties and identifying how any infraction can be resolved and its resulting damage remedied. In addition, the practices help teachers, administrators and others gain skills that make them more accountable and responsive to students.

Currently in his 10th year at Skinner Middle School, Joe Waldon has also become a true believer. He became more intrigued with restorative justice while attending a training several years ago, he said.

?I was familiar with the big picture of it but not really with how it can be infused into everything,? said Joe, a DCTA member. ?The idea of using restorative work in the classroom was part of the training. It really made a light bulb go off in my head.?

And it made him realize that Skinner was moving in the right direction. By incorporating restorative practices throughout the school and directly into the classroom, teachers and students build stronger, more productive relationships.

?It takes time, and it?s all about listening,? Joe said. ?Through the process of listening to each other, you end up building really strong relationships.

The stronger the relationship between the student and the staff member the more cooperative the student will be, he said, ?because they want to please the person with whom they have a good relationship.?

In fact, Joe said the majority of he and his team?s work occurs when students ?self refer? to discuss problems they?re seeing or an issue they?re having with another student or teacher.

?What I firmly believe is that our traditional way of doing discipline ? of suspension and punishment ? doesn?t teach anything,? Joe said. ?If it taught something our prisons wouldn?t be full in the ways that they are full. We know that suspending kids doesn?t change behavior.?