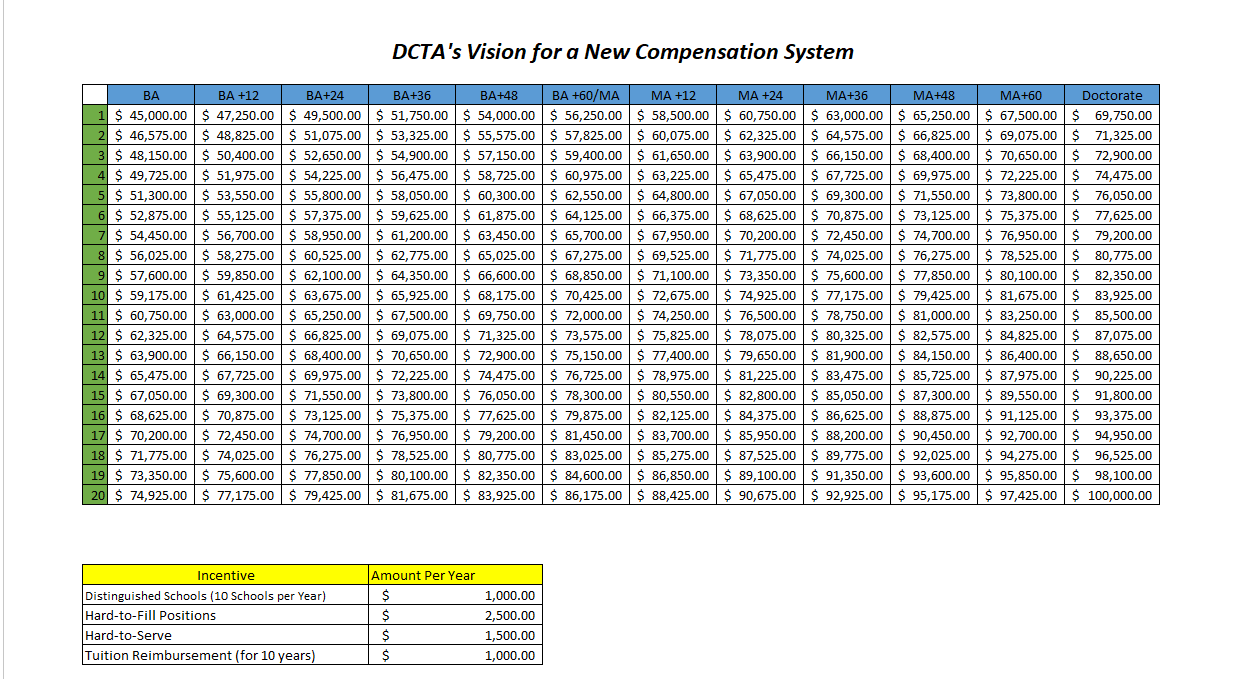 Above: DCTA’s detailed salary schedule for a compensation vision that provides real stability and predictability

The Denver Classroom Teachers Association unveiled its vision for teacher compensation last night in a proposal that adds more dollars to teacher base salary across the district while reducing the size of incentive pay that touches only a fraction of the district?s workforce. The Association presented its proposal at the DCTA-DPS Compensation Bargaining Session held last night as both groups work toward finalizing a new Compensation Agreement before the March 14 deadline.

Teachers in the packed room erupted into applause at the union proposal and showed strong reactions all evening, displaying signs supporting or opposing positions taken by the two parties. The goal, according to DCTA representatives, is to create an environment where teachers can predict and plan for their compensation without relying heavily on incentive ?bonuses? that very often are out of a teacher?s control.

?Our plan represents what we on our team see as correcting some of the mistakes that were made in 2008,? said Rob Gould of the DCTA Bargaining Team, referencing when the current ProComp Agreement was signed. ?This proposal makes teaching a real profession, one you can plan for and make money throughout a career. There?s simplicity and predictability in this system, making it easier to attract and retain teachers to DPS. Plus, it aligns with the ballot language so it’s a reflection of the will of the voters.?

In the DCTA proposal ? presented with a detailed chart outlining specific salary targets ? teacher salaries begin with a base salary of approximately $45,000 in year one to as much as $100,000 by year 20, with incremental increases available each year through a ?steps and lanes? system of compensation. A variety of factors influence a teacher?s ability to increase their salary, including years of service, education level, professional development activities and annual incentives. The overwhelming result of the plan would make base salaries more stable and predictable, according to DCTA.

?What we?ve heard over and over again is that our teachers want a salary that is predictable,? said Lynne Valencia-Hernandez of the DCTA team. ?This plan accomplishes that goal.?

In its counter proposal, the district outlined a plan scarce on details but that doubles down on incentive-driven bonuses which create the compensation instability and unpredictability driving talented teachers away from DPS. Almost all of the compensation increases outlined in the district?s skeleton proposal were bonuses that relied upon evaluations and other circumstances far outside of a teacher?s control. The DPS proposal would maintain the status quo of unpredictability, and created no initiatives to meet the agreed-upon goal of increasing base salaries.

Teachers demonstrated deep disappointment at the district?s conceptual presentation that offered no specific numbers or data. One audience member lamented the fact that the district was unable to make a specific proposal with the current ProComp Agreement scheduled to expire in just two weeks.

As evidence, one teacher in attendance commented that despite his years of service with the district his compensation has decreased by $1,000 in each of the last three years due to fluctuating incentive pay. This makes it impossible for him to consider buying a home in Denver or plan for his financial future, the teacher said to rousing applause from the roomful of teachers.

The incentive-based approach to compensation goes against the original intent of ProComp, DCTA argued during the session.

?Incentive bonuses were supposed to be recognition for performing certain work or achieving certain goals,? said DCTA team member Jeff Buck. ?It was never intended to increase their pay to convince teachers to stick around. All this big incentive stuff was all crafted after ProComp was voted on and implemented.?

DCTA wants to create a more traditional salary schedule that enables stability across the district, the Association said. The District continues to believe that incentives are what encourages teachers to work in DPS or to aspire to teach at certain ?hard-to-serve? schools or ?hard-to-staff? positions.

?The district continues to persist with this idea that you can throw some extra money and teachers are going to continue to go to those schools and positions,? Jeff Buck said. ?The incentive is not what is attracting teachers. It?s how teachers are treated in the buildings.?

Acknowledging the urgency, DCTA asked to schedule an all-day bargaining session on March 14 with DPS Superintendent Tom Boasberg at the table. The district is ?looking into it? but a member of their team mused quietly that Tom was unlikely to be interested in attending.