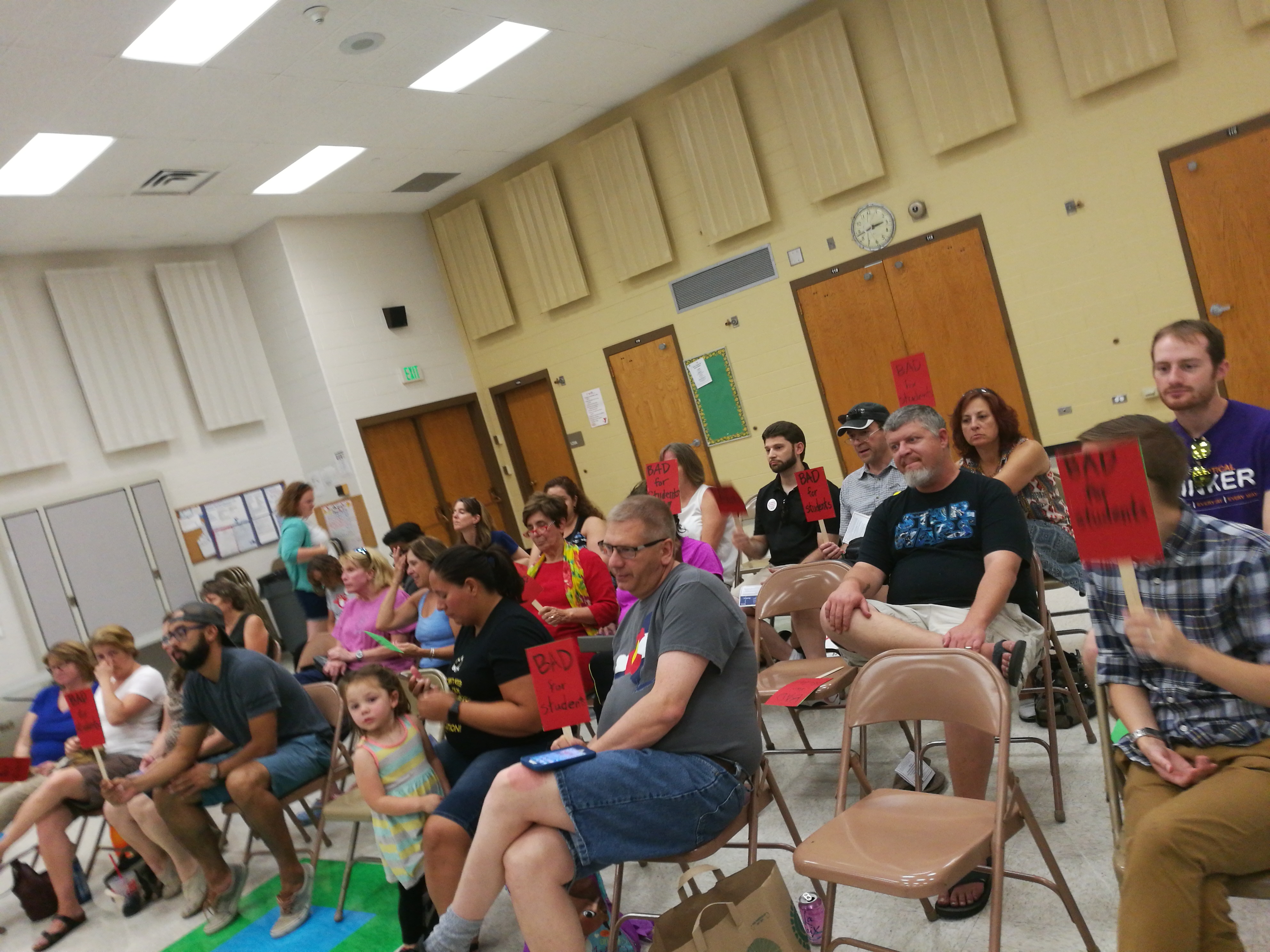 Photo above: Teachers and supporters at Monday’s Bargaining Session

DCTA and DPS met twice this week in bargaining sessions (Mon., July 24 and Tues., July 25) after a month-long summer break and following the district?s declaration of an impasse in late June. During Monday?s meeting, the teams were able to finalize and come to agreement on two of the contract?s articles (Articles 1 and 27).

And that?s exactly the point, according to members of the Bargaining Team. During caucus at the start of Monday?s session, DCTA Deputy Executive Director Corey Kern explained that Superintendent Boasberg had committed in private meetings with DCTA leadership to negotiate on wages. Then just days later, they declared an ?impasse.?

?The district?s goal,? Kern said, ?is to keep the public and teachers out of the bargaining process.?

The Master Contract calls for a private mediation company, AAA, to manage any mediation that may be required. DPS has requested a federal mediation service that does not allow public bargaining. Since Colorado state law requires public access to negotiations, DCTA is demanding that any sessions held in mediation remain open to the public, including teachers of course. By the close of Tuesday?s sessions, both bargaining teams agreed to review a list of potential mediators.

?As much as they can box out teachers from the process, it allows them to do and say things that they don?t want to do and say in front of you,? Kern told the teachers and others assembled at Monday?s session. ?The only thing the impasse does for the purposes of our contract is it forces that mediator into the room.?

In the meantime, bargaining sessions continue as always ? and DCTA remains committed to ensuring an open, transparent process by encouraging attendance at the sessions as well as webcasting all sessions via Facebook.

That hasn?t stopped DPS from continuing its attempts to limit the public?s voice and access to the sessions. During a caucus break between the two teams, a contingent of supporters attempted to sit in on the DPS caucus conversation (as allowed by state law) and were turned away. In addition, at one point during Tuesday?s session, DCTA Vice President, Christina Medina, stood to address the room and was pointedly reprimanded by DPS team member Bart Muller.

?You?re not on the bargaining team,? he said.

Finally, at another point in the session, when teachers in the audience attempted to speak about their experiences, Kelli Varney, another member of the DPS bargaining team, could be heard mumbling disapproval at ?being interrupted.?

So much for the district?s professed appreciation for public input.

DCTA and DPS began negotiations way back in January, with multiple bargaining sessions every month each focused on a variety of issues. At this point, there aren?t any issues that remain untouched. Yet district representatives again struggled this week to provide concrete answers and solutions for questions and concerns DCTA has raised over and over again.

They express ?100 percent? support for DCTA positions in many cases. DPS is in ?complete agreement,? they?ll say. Yet that full-throated expression of agreement falls flat when specifics are requested.

?We?ll have to get back to you,? is a common response. Or ?these are really hard questions.? Sometimes they also have to ?talk about that for a bit.? Maybe it?s the complexity of certain issues that?s preventing clear decision-making. Maybe it?s truly a need for further study (despite months of discussion and negotiation). Or maybe it?s due to the complete lack of participation by district leadership at bargaining sessions.

During this week?s sessions, DCTA again asked the DPS team if and when Superintendent Tom Boasberg or Deputy Superintendent Susana Cordova would be in attendance. And again there was no concrete answer provided.

It may very well be why difficult negotiations on instructional materials, LEAP and other issues can?t be concluded during the sessions. Each time these issues are raised the same discussions conclude with the all-too-familiar ?this is tough stuff? refrain from the DPS team.

Tough stuff, indeed ? which is probably why it?s important that decision makers participate in the process. But bargaining sessions will move forward as scheduled and DCTA will continue to ask these tough questions ? while demanding leadership from the district.

Note to DPS: ?Complete agreement? means no more study is necessary. And ?100 percent? support means there?s not even a fraction of doubt. It?s time to stop with the word games and truthfully commit to the principles you say you support. Strong teachers need strong district leadership that?s brave enough to do the right thing. Stop feigning support for the basic, modern, reasonable workplace standards DCTA is demanding ? and start truly supporting quality education for Denver students.

Don?t forget to join us at the next two scheduled bargaining sessions on Monday, Aug. 7 from 1 to 5 p.m. and Tuesday, Aug. 8 from 2 to 6 p.m. at McKinley-Thatcher Elementary School.